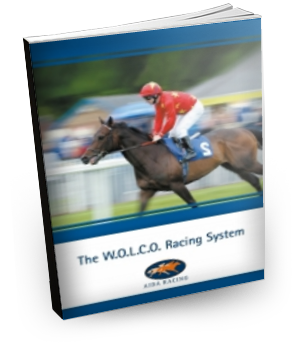 Back in 2005 I was working late most nights on what became the WOLCO Racing System. I was, let's say between girlfriends at the time, and a lot of my time was spent with my head in the Racing Post.

I am often asked what does WOLCO stand for? Originally it was just meant as a working title and it became so because it was finding me so many regualr winners that I knew the next one wouldn't be far away.

WOLCO stands for Win Or Lose Carry On - Now please don't think I am advocating chasing losses or anything silliy like that, but I am saying that when this system is on form, it really can be quite prolific as you may want to read below or on the Testimonial page.

Since I research, designed and wrote this little system, I got married, moved house and we had three children, as you can imagine the time I used to have has disappeared a long time ago. Therefore I no longer keep up with these results to anything like the extent I used to.

I realize that having a full set of results since 2005 would be something special and while horse racing results will always have their ups and downs, I am convinced that this system is just as consistent as it ever was.

Take a look at this day from June 23rd 2005, there were no fewer than 7 WOLCO Strong Bets and they ALL WON!

Now, I am not suggesting that backing at Odds-on is something that I recommend, personally I don't see the sense in risking more than you can win, but each to their own of course.

However, 7 selections and 7 winnners on one day just shows how devastatingly effetive this system really can be at times.

If you'd like to read one of the letters I use to send out to interested parties back in 2007 use the Contact page to email or call me and I'll email or posr you a copy of the letter.

To order at a copy please contact for latest offer...