If You Are Looking For a Professional Approach to Backing - This is it! 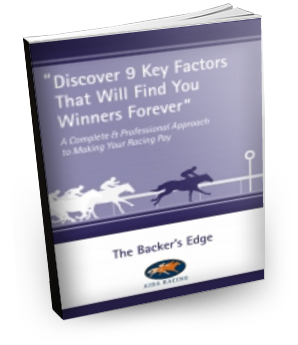 Originally called 'Aida's Arrow Racing System' now called 'The Backer's Edge' (because the first name didn't mean anything) the Manual contains a wealth of knowledge both from Pro-Gamblers and many years of my own trial and error and research.

This way of backing will, at least for most people, give them an entirely different way to look at racing, and dare I say it, provide most people with a real racing eduction that would be hard to find anywhere.

I don’t tell you that lightly and I am certainly not kidding. I have never revealed all of this information before, not even at my £1,500 a seat Seminars, it really is very powerful. The system is a like a Winner Finding Machine Gun, many times firing out one after another.

Here are some examples you will find in the manual, just look at some of their form figures…

1600006  ‘Justonefortheroad’  Won at 10/1 - This horse had won seven races previous to this win but his form figures since that race were poor to say the least. This horse was easily overlooked on the surface but he qualified for 4 of Aida’s Arrow Factors and won at 10/1, although 14/1 was available.

740-90  ‘Hanoverian Baron’  Won at 10/1 - Once again this horse’s form figures would suggest to most punters that the horse had no chance. Yet in less than a minute of looking at the race armed with my System you would have quickly spotted this horse qualified for 4 of 9 Factors and won by almost four lengths.

612412  ‘King’s Masque’  Won at 7/2 - This horse had a considerably better set of form figures and was forecast at 5/1 which certainly fitted in very well with my Each-Way strategy. The horse went off as the joint 7/2 favourite  and won by almost two lengths. He qualified for no less than 5 Factors which certainly doesn’t happen every day and was a very good bet indeed.

645/365  ‘Hold The Star’  Won at 100/1 - Most people will never back a horse at 100/1 and see it win. I have and sooner or later if you follow my system you will too. As you can see this horse had not finished better than 4th on the All Weather in her previous six races and the horse only qualified strongly on 1 Factor and slightly less strongly on another 2, (3 Factors in all) but at 100/1 the horse was surely worth a small bet. In fact ‘Hold The Star’ beat the 6/5 favourite by over a length. If you use Betfair you won’t be surprised to know that the Betfair SP was over 260/1!

80700-0  ‘Flag Of Glory’  Won at 14/1 - This horse was forecast at 25/1 and with form figures like that most people would think it’s not surprising. But the horse qualified strongly for 3 Factors and won comfortably. The horse had never won at the course and never won at the distance before either and yet Aida’s Arrow found him in less than a minute.

74P452-  ‘Hawaii Kiss’  Won at 5/1 - This horse qualified as a very strong selection for one of the top four Factors as well as qualifying strongly for another one along with a third Factor too, (3 in all). But it was the very quickly spotted first Factor that made the horse such a good bet. As there were eight runners in the race it was a perfect candidate for each-way backers. I would also point out that the trainer had a record of 0 wins from 34 runners at the course and the jockey a 0 wins from 13 rides for the trainer. Forget the usual stats, use Aida’s Arrow to find the winners other people won’t.

414300-  ‘Mayfield Girl’  Won at 40/1 - This horse qualified way ahead of anything else in the race for one of the 4 main Factors along with less strong qualification for 2 others. The filly had not raced for 186 days but won at 40/1. This is a very powerful Factor and it will find you winners on its own all year around. The horse was as high as 94/1 on Betfair.

-3F5P21  ‘Decimus’  Won at 9/4 - I prefer not to back at this sort of price but if you are a favourite backer this horse qualified as a very strong selection for this system with 5 Factors in his favour. Despite meeting trouble in the race and negotiating a hastily dolled off last hurdle, which meant he had to change course, the horse was still more than good enough to win.

09-459U  ‘Benbane Head’  Won at 11/2 - This horse was another good each-way bet because of how strongly he qualified for 1 of the main 4 Factors. He also qualified for 2 other Factors (3 in all) and against the odds and what was said in the Racing Post too he won regardless.

All of these examples and many more are waiting for you in the manual. You will see how to use the 9 Factors that make up Aida’s Arrow and be left in no doubt as to how you will find your own winners and lots of them for years to come.

I could show you hundreds more winners since I have been collecting the evidence for this system and you will see at least 121 winners in the manual. It is evidence that cannot be disputed and evidence that will give you the confidence to find winners forever.